1BestariNet is a project managed and funded by the Ministry of Education to deploy fast broadband connections to the over 10,000 government schools across Malaysia and to provide them all with a virtual learning environment (VLE).

However, given the disparity in computer and tablet device ownership, as well as broadband Internet access between the more affluent cities and towns and the small towns and rural areas (especially on the east coast of the peninsular, as well as Sabah and Sarawak), one wonders where many less fortunate students will be able to fully benefit from such a system.But first some backgroundThe idea for 1BestariNet was first raised by some of the participants in the Performance Management and Delivery Unit’s (PEMANDU’s), Communications, Content and Infrastructure, National Key Economic Area (CCI NKEA) labs.These “labs” in fact are intense, 8-week long brainstorming sessions involving representatives of government ministries, government agencies, academia and private sector stakeholders. They are related to one of the Economic Transformation Programme’s (ETP’s) 12 NKEAs.

According to Dr. Fadhullah Suhaimi Abdul Malek, director of PEMANDU’s CCI NKEA, 1BestariNet was proposed during discussions on how to drive use of broadband in government services, health and education.To help the education sector, the lab concluded that schools must have adequate connectivity, content (such as the VLE) and enough devices to access the content on.The lab intended 1BestariNet to replace Schoolnet launched in 2004, which fell short of expectations, especially in terms of speed (only 1Mbps) and capacity, and lack of specifications and integration.The Ministry of Education (MoE) was invited to thoroughly and rigorously scrutinise and evaluate the1BestariNet idea. The MoE liked it and got the project.In May last year, the MoE called for tenders to connect up Malaysia’s 9,924 schools with broadband Internet access and to provide them with a virtual learning platform. Internet speeds in urban areas must range between 2Mbps to 10Mbps and from 1Mbps to 4Mbps in rural and remote areas.Altogether 19 companies submitted tenders and YTL Communications got the five-year contract on May 2012, including to connect up all government schools with 4G wireless broadband access in the first two years.Access devices – MCMC steps in with 1Malaysia Netbook programmeWhile the MoE manages and finances deployment of 1BestariNet, the Malaysian Communications and Multimedia Commission (MCMC) got the task of providing the devices to access it on, and this led to the 1Malaysia Netbook programme.Under the programme, the MCMC will distribute one million netbooks to students from low-income families altogether earning less than RM3,000 per month, in areas designated as eligible for the Universal Service Fund (USF). 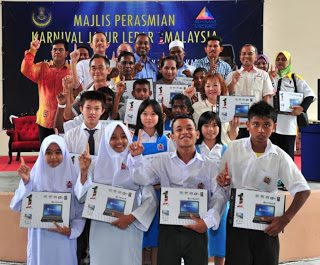 Following the privatisation of telecommunications service providers into profit-oriented companies, it was found that they generally avoid deployment of infrastructure and services in rural areas which usually have many low income families and which are unlikely for the operators to realise a return on their investment. So several countries, including Malaysia introduced a USF to help bridge the communications divide.In Malaysia, all communication network operators pay 6% of their annual income into the USF and the MCMC utilises it to pay for communications infrastructure and service deployment in USF areas. The 1Malaysia Netbook programme seeks to address the digital divide and enable low-income families to be part of a Digital Malaysia.So far, over 800,000 netbooks have been deployed and complete distribution of all the one million 1Malaysia Netbooks is expected by the end of this year.The cloud-based Frog VLE, provided by YTL subsidiary FrogAsia enables online interaction between teachers, students and their parents; it lets teachers assign homework and assignments to students, create online repositories of course and reference material, send them coursework, class schedules, events and so on.The school has 1,796 students, 128 teachers and 10 non-academic staff and besides Frog VLE, it also has MyGFL and MAMPU’s learning management system.Billy Downie, head teacher of The Streetly Academy, a secondary school in Sutton Coldfield, a suburb of Birmingham,U.K., told the conference about how Frog VLE helped his school rise from the bottom 1% of U.K. schools for student progress in 2003, into the top 5% in 2012.Fine and dandy, but!While all that sounds fine and dandy, being able to fully benefit from such a system would presuppose that most, if not all students have ready access to a computer or a handheld device, as well as Internet access…but do most Malaysian students enjoy such a luxury?Well, it appears not, irrespective of which company won the contract.“Most schools have at least a computer lab with about 40 PCs and each of YTL Communications’ base stations covers a 4km radius, which provides coverage of the area around each school,” said Yeoh Pei Lou. FrogAsia executive director.However, imagine the long queues of students in a school with 1,700 to 2,000 students lining up to check their homework and assignments on the school’s lab computers, let alone do their homework on them.“Since most students don’t have computers at home, so they were going to cybercafes, where they are exposed to unhealthy influences, so besides our computer labs, we provided computers in public areas within the school for them to use,” said En. Sukimin, headmaster of a primary school in Sepang.“My daughter’s school has Frog VLE and most of its students have at least one computer at home but I’m especially concerned for families with five school-going children who will have to fight for time on the computer,” said a software engineer and training consultant in the Klang Valley who requested anonymity.“I’m generally rather sceptical about the benefits of computers in education and if they are stolen, lost or damaged by rough handling, what will the students have to use then?” he added.“While my daughter’s school in Wangsa Maju (in Kuala Lumpur) now has YTL Communications’ Yes 4G broadband access, I don’t know whether it ever had Schoolnet access,  since at one time its teachers had to share a wireless broadband WiFi device,” said a parent who also declined to be named.Now this writer is a member of the SMI Alumni Association, Klang Valley and recalls that each year since he joined in 2010, the association has provided bursaries to assist needy students at St. Michael’s Institution, Ipoh with the cost of their study expenses, including books, uniforms, transport costs, etc.

In April this year, the association donated RM15,000 to the school’s parent-teacher association to be disbursed among 75 needy secondary school students in Forms One through Upper Six, who had been identified by their teachers as requiring assistance.Located in the heart of Ipoh and among its leading schools, St. Michael’s is not within one of the MCMC’s USF areas and if these 75 students of all races are unable to afford the basic necessities of their education, I wonder how many more will be unable to afford netbooks or tablet devices as well as to maintain them.In July this year, a Business Monitor International report noted, “In 2012 Malaysian PC sales will be supported by the government’s push for greater broadband penetration and it has set an optimistic target of 75% by 2015. Malaysia’s IT market is distinguished by a marked digital divide, which effectively creates two separate markets. In the Klang Valley area around Kuala Lumpur, a mature urban population surpasses even some developed nations in terms of IT adoption on some indicators.“So unless that digital divide can be closed, it’s unlikely that all students will be able to fully benefit from what 1BestariNet has to offer.