Dato’ Seri Ivan Teh stands on one of the three floors that Fusionex’s 60,000 sq ft R&D facility occupies at Plaza 33 in Petaling Jaya, putting on a demonstration of his company’s voice recognition software: “And… lights!” He snaps his fingers, and the elongated ceiling lights dim. One more snap, and the lights beam at full brightness upon his command. Another click of his fingers closer to a room featuring a life-size R2-D2 model (which lets out the occasional excited bleep), and a glass window – previously opaque – turns transparent.

It makes for an impressive, entertaining display of the sort of technological wizardry that Fusionex is capable of achieving but, really, it’s just the tip of a very substantial iceberg. From the time it was founded in 2005, Fusionex has made a name for itself in the global technology industry by specialising in analytics, big data, machine learning, artificial intelligence and, perhaps most importantly, its ability to make sense of vast amounts of structured and unstructured data for its clients. With an official net worth that currently stands at MYR1.2 billion, this is a company that – as Dato’ Teh explains – began with a badminton game and a dream of becoming a superhero.

Born and bred in Petaling Jaya, Dato’ Teh grew up as an academic all-rounder (it helped that his mother was a teacher) with an aptitude for mathematics, science and technology, as well as a love for art and drawing. “At a young age, what I really liked was innovation,” he recalls. “I began looking up to superheroes like Iron Man, Superman, and Batman when I was about eight or nine, so I’d draw them and imagine being a superhero too. It wasn’t their superpowers that I wished for, but I really wanted to solve problems and fight villains.

“As I got older, I understood that I couldn’t become a superhero in real life, but I still admired Iron Man for his innovation and creativity, where he could bring things like art and science together, the way I wanted to. That’s science technology.” This inevitably drew him towards a degree in computer science, which in itself became a springboard from which to enter the IT industry, propelling him towards managerial positions in multinational companies including Hewlett-Packard, Intel and Accenture. 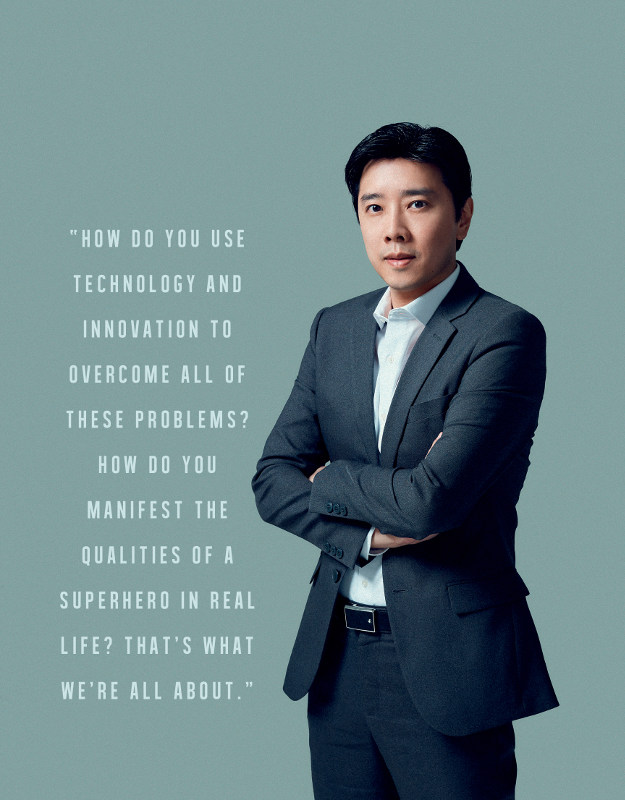 “When I started working in these organisations, we’d be flooded with a tsunami of data and the problems that stemmed from it, like hospitals and medical centres, where I’d observe long queues and inefficiencies. I thought to myself, ‘What can I use or do using technology and a combination of skillsets to make life better, faster and more efficient? What can I do to change the world?’ These were eureka moments for me and, obviously, it’s important to have a vision – but how do you execute it?” It was only during a badminton game with some of his friends, who were in similar industries, that things began to get moving.

“At one of the sessions, we recognised there were a lot of problems across industries, where people were spending lots of money and yet waiting times at retail outlets, banks, telcos and airlines were bad. A few of us said: ‘There must be a better way of doing this – it can’t be all that bad. We have to be able to challenge the status quo and find a better way forward.’ We wanted to start things together, but many of my friends back then had their own careers and livelihoods to look after, and some of them were about to get married.

“I said: ‘It could be a big risk for you. Would it be something you want to do? Why don’t you let me try it for a couple of months and validate the idea that the demand is actually there? Once we’ve proven that there’s a market for what we’re offering and the business model really works, I’ll invite you to come on board.’ And that’s what I did.” It was – for a time – very much a one-man show, where Dato’ Teh had to do everything from coding software to searching for clients. No stranger to hard work (as a 10-year-old, at his father’s insistence, his school holidays were spent selling bedsheets at textile stores and pasar malams), he persevered.

“For a couple of months, I navigated the waters, finding ways to ensure our skills and ideas would be accepted in the market – which they weren’t, by the way. That was painful. People wanted a track record. But slowly, we started to gain traction and got our first few breakthroughs after six to nine months, thereby validating our model. Once we were more stable and had our first customers, I wanted Fusionex to grow and accelerate, and I couldn’t do that alone. That’s why most of the pioneering team – there were about five of us who started this – are still with us today as we continue to invite more people into the Fusionex family.”

WE COULD BE HEROES

The company’s seemingly light-hearted nickname for its workspace, the ‘Office of Superheroes’, appears to be half a vision of the future and half a teenage boy’s fantasy bedroom when you wander through it, for all the Marvel and DC Comics memorabilia in plain sight. There’s even a sizeable karaoke room with a professional sound system, in which Dato’ Teh shows that he’s not microphone-shy, either. (For the record, he does an excellent rendition of You Raise Me Up, and could give Ed Sheeran a run for his money, too.) But for all the office’s creature comforts, Fusionex’s team – which now consists of over 550 staff – works as hard as it plays. 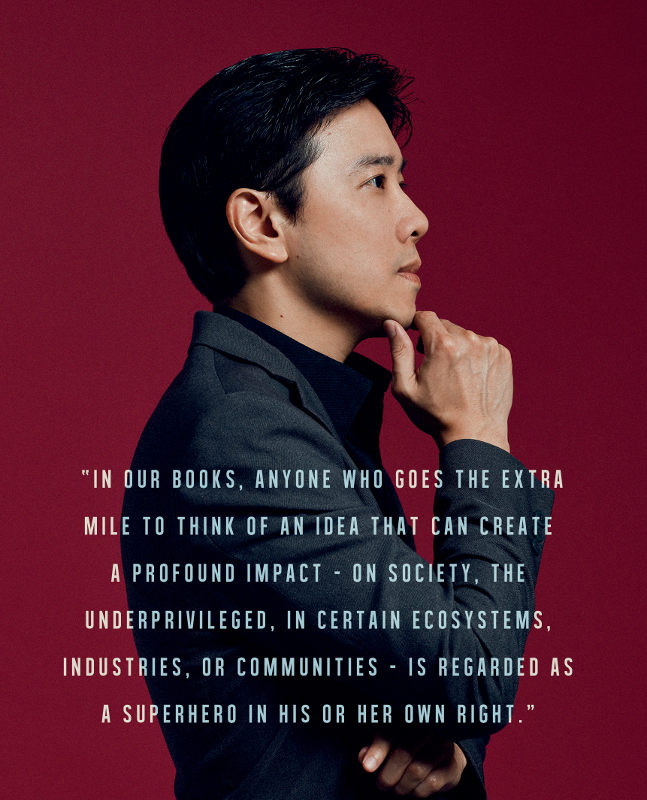 “It’s an amalgamation of different types of ideas and technology, where villains are no longer beasts or monsters – they’re problems,” he says. “My parents taught me to understand how to bring things together and comprehend the real-world problems that people face. So, where you see poverty, difficulties in various situations, disasters or explosions, how do you use technology and innovation to overcome all of these problems? How do you manifest the qualities of a superhero in real life? That’s what we’re all about.” To illustrate the nature of Fusionex’s operations, he posits the company not just as a source of invention, but a sorter of information – an intelligent base that cuts through all things complex and incomprehensible.

“In any organisation, there are so many problems to pinpoint. In a manufacturing business, you want to ensure you minimise defects and downtime – some of these can have huge financial implications when there are quality issues or a whole batch of goods need to be returned. More severely, if you’re in a chemical plant and have a problem – say, you don’t detect a drastic increase in temperature – it can result in a hazardous explosion that could cause fatalities. What we do for our clients is identify their problems together with them, because we don’t know everything, so we have to operate in a consultative way.

“But we work with them in a diligent and very focused manner. Fusionex combines its technology with the expertise of our team to solve a client’s problems using data technology. We believe data is the new crude oil. It’s something that is extremely important, but will remain raw data unless we collect, store, process and analyse that data so that it becomes meaningful and insightful to our customers. It gives them foresight as to what they should do, based on what happened in the past, so they can plan better for the future. That’s what we do for our clients, all of whom come in different shapes and sizes, big and small.”

Gone are the days when Dato’ Teh would have to persuade potential clients to give Fusionex even a passing glance – although that may, in part, be due to a heavyweight replica of Thor’s hammer, Mjölnir, which resides in his office (“I don’t have to say much when I’ve got it in my hand,” he smiles). The company’s client roster now includes significant local and international clients such as Starwood, Ritz Carlton, Marriot, CIMB Group, American Airlines, Dell, Intel, Fedex, AEON and Malaysia Airlines, spanning a diverse variety of industries – all of them looking to Fusionex to give them the cutting-edge insights they need.

“Different industries will be different, but the crux of it is that data still resides across all industries, and when we take a look at it – as we draw parallels and compare one industry to another – while they’re adjacent, there are similarities as well,” he expounds. “From day one, our mantra was to solve problems. It wasn’t to go out there and sell a box or sell hardware – that doesn’t motivate me. We wouldn’t have been able to create new jobs or more ideation, which is what lies in Fusionex’s DNA – that fusion between business, technology and the excellence of the experience.”

With an eye on Fusionex’s own future, there should be plenty to keep Dato’ Teh busy, beside the company’s ever-expanding client base. The previous year saw the company entering into a strategic partnership with Alibaba Cloud, which promises to open the door to the wider ASEAN region. “We’re focusing on digital transformation across Asia-Pacific,” he relates. “The ASEAN region itself has a population of close to 650 million, while its Internet and mobile users number about 400 million. That’s twice as large as the size of the USA, which stands at 200 million, and it’s half the size of China, so there’s a huge market in the ASEAN region itself, let alone Asia-Pacific.

“Pairing Alibaba’s cloud computing expertise and infrastructure with Fusionex’s big data, artificial intelligence and deep learning capabilities is a strong partnership that will enable us to combine our brains for our joint customers. How do we go in and empower them to use technology, to drive digital transformation and help them improve their businesses? Many companies in Asia-Pacific or the ASEAN region might not have the exposure to certain technology – not everybody has the budget to invest huge amounts of money – but Fusionex has the muscle to allow different people or companies of various shapes and sizes to embark on this journey.”

And looking at his own journey, how has he – as Fusionex has expanded – progressed as a leader? “I came from humble beginnings, and I believe that every leader should have the humility to learn and learn continuously. There’s great power in that. Every single day, I meet with lots of different people: CEOs and captains of industry, but also normal people – good people with ideas who haven’t yet had an opportunity. So, you listen and learn, exchange ideas and fine-tune problems. But I always think about what we can do to make the world a better place.

“It doesn’t mean we’ll always be successful, but if we do that again and again, it will keep us awake. It’s not because of immediate profits or going out there and having the dollar sign ringing in our heads.” (True to form, just before Fusionex’s debut on the London Stock Exchange in 2012, Dato’ Teh famously turned down a sum of USD62.8 million from the company’s pre- IPO roadshow, in favour of a more modest USD18.9 million.) “It’s about going there and saying, ‘Let me hear you out, and you tell me what problems you have. I might not be able to help you directly, but I could connect the dots with different partners by bringing in technology or investing in certain initiatives to give you that ROI.’

“That’s what keeps us excited. We have that superhero concept in Fusionex, in our state-of-the-art, crazy office, because it’s about crazy ideas. In our minds, there’s no idea that’s silly. In our books, anyone who goes the extra mile to think of an idea that can create a profound impact – on society, the underprivileged, in certain ecosystems, industries, or communities – is regarded as a superhero in his or her own right. That’s what we strive for, and will continue to do.”

(This article was first published in The Peak)