Gartner Says Malaysia IT Spending to Increase 7.5 Percent in 2015

Malaysia IT spending is expected to increase to MYR 65.1 billion in 2015, a 7.5 percent rise from last year, according to the latest forecast by Gartner, Inc. (see Table 1 & 2). Comparatively,  worldwide IT spending is set to shrink to $3.66 trillion in 2015, a 1.3 percent decrease from 2014 (see Table 3). Gartner said that the rising dollar is chiefly responsible for the slowdown.

“We forecast U.S.-dollar-valued worldwide IT spending in 2015 to shrink by 1.3 percent, down from 2.4 percent growth forecast in last quarter’s update,” said John-David Lovelock, research vice president at Gartner. “However, this is not a crash, even if it looks like one. The recent rapid rise in the value of the U.S. dollar against most currencies has put a currency shock into the global IT market. Taking out the impact of exchange rate movements, the corresponding constant-currency growth figure is 3.1 percent, only off 0.6 percent from last quarter’s update. Such are the illusions that large swings in the value of the dollar versus other currencies can create.”

“However, this illusion masks a bigger issue that has real implications. Every product or service that has a U.S. dollar-based component must have those costs covered at the lower exchange rate. The simple implication is that there will be price rises. However, there are many other market forces at work — protecting U.S. dollar profits will require a nuanced and multifaceted approach involving pricing, partners and product management,” said Mr. Lovelock.

The Gartner Worldwide IT Spending Forecast is the leading indicator of major technology trends across the hardware, software, IT services and telecom markets. For more than a decade, global IT and business executives have been using these highly anticipated quarterly reports to recognize market opportunities and challenges, and base their critical business decisions on proven methodologies rather than guesswork. 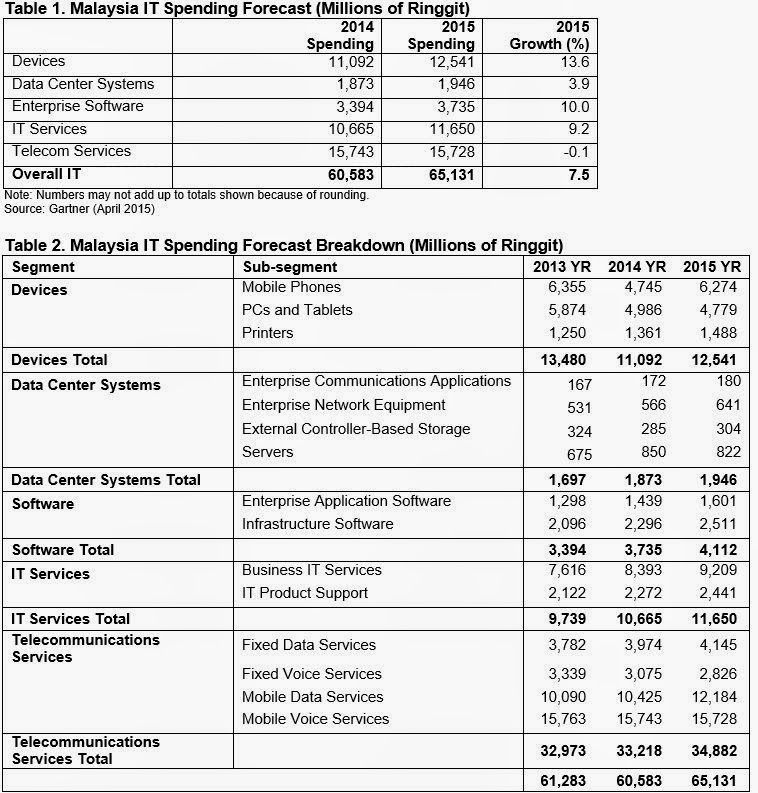 The U.S. dollar spending on devices (including PCs, ultramobiles, mobile phones, tablets and printers) for 2015 is forecast to decline 1.2 percent to $685 billion. Spending for all devices in 2015 was revised down partly due to a slowdown in PC purchases in Western Europe, Russia and Japan, countries where local currency has devalued against the dollar. The mobile phone market is not as affected by the currency shifts. Substantial change in the phone mix in emerging markets toward lower-priced smartphones negates price increases of premium phones, resulting in flat phone average selling prices between 2014 and 2015.

Data center system spending is projected to reach $142 billion in 2015, an increase of just 0.4 percent from 2014. External controller-based storage, enterprise network equipment and servers have all been impacted by the depreciation of some local currencies against the U.S. dollar, but the server segment has seen the biggest impact due to the greater pricing pressure that server vendors are exposed to, due to their relatively lower margins.

Spending in the enterprise software market is on pace to total $320 billion in 2015, a 2.3 percent increase from 2014. Nevertheless, this is a downward revision from the last forecast and is the result of a substantial reduction in the forecast for office suite spending, reflecting the acceleration of Office 365 adoption. Office 365 is disrupting traditional revenue flows. Its cost is prorated over the life of the subscription, resulting in significantly lower revenue growth as users transition away from the on-premises model.

IT services spending will contract slightly to $942 billion in 2015, down from $948 billion in 2014. The largest reductions were made in implementation services, particularly in the U.S. Although the oil and gas industry is only 1 percent of the IT services market, oil and gas buyers historically react quickly when their prices drop, often cutting back on spending 20 percent or more. Because the U.S. is a large oil producer and a large market for IT services, the largest spending reductions on services is expected to take place in the U.S. through 2015 and 2016, with an early impact on implementation services.

Growth in spending on telecom services is predicted to shrink by 2.6 percent in 2015, to total $1.57 trillion. Among the more prominent changes affecting multiple regions were reductions in total connections for developed markets such as the U.S. and several Western European nations, as growth in data-only connected devices and multi-SIM connections were not as high as previously expected.

Gartner’s IT spending forecast methodology relies heavily on rigorous analysis of sales by thousands of vendors across the entire range of IT products and services. Gartner uses primary research techniques, complemented by secondary research sources, to build a comprehensive database of market size data upon which to base its forecast. The Gartner quarterly IT spending forecast delivers a unique perspective on IT spending across hardware, software, IT services and telecommunications segments. These reports help Gartner clients understand market opportunities and challenges.

About Gartner
Gartner, Inc. (NYSE: IT) is the world’s leading information technology research and advisory company. The company delivers the technology-related insight necessary for its clients to make the right decisions, every day. From CIOs and senior IT leaders in corporations and government agencies, to business leaders in high-tech and telecom enterprises and professional services firms, to technology investors, Gartner is the valuable partner to clients in approximately 10,000 distinct enterprises worldwide. Through the resources of Gartner Research, Gartner Executive Programs, Gartner Consulting and Gartner Events, Gartner works with every client to research, analyze and interpret the business of IT within the context of their individual role. Founded in 1979, Gartner is headquartered in Stamford, Connecticut, USA, and has 6,800 associates, including more than 1,500 research analysts and consultants, and clients in 90 countries. For more information, visit www.gartner.com.