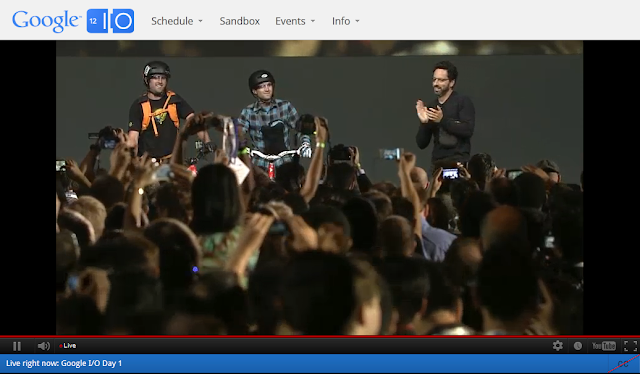 Anyway, Google plus has the pure vision of sharing information without restriction and it now comes with a tablet app. Vic also explained Google Plus Events which incorporates certain sense of automation to social events management such as organising of photos automatically and through self discovery by aggregating all photos taken from your guests who attended the same event.

It gives users a presentation platform for social media information, making users relevant to the reality without having to even think about the next move. In fact, Google plus aims to surprise with information that interests users.

Google I/O 2012 keynote started off with an introduction of Android 4.1 Jelly Bean. 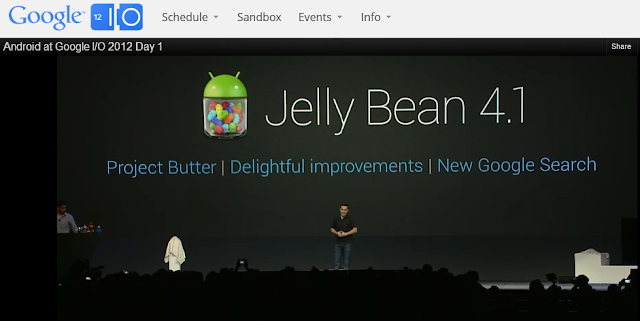 It also introduces offline voice typing for US English which means that it is able perform crisp voice recognition without the need of relying powerful cloud based computing resources, it all fits inside the limited capacity of Android devices.

Search features have also been uplifted with a new GUI, faster and more natural voice search as well as introduction of knowledge graph where it provides summaries of search results which are derived from computation of data which comprises of both graphical and text information. It is graph because the decision is based on statistics.

More automation features are introduced. With Google Now, which makes use of data of your location, calendar and search patterns to help users with organising their hectic lifestyle, offering a new hope to cope with the complexity of digital age. It is able to automate public transport schedules, place of interest, next appointments, flight schedules and sports updates; just anything that one requires on daily basis.

Android 4.1 Jelly Bean will be available on Galaxy Nexus phones coming mid July 2012. It will also be released to the open source community alongside software development and platform development kit.

The Nexus 7 tablet was introduced next. This tablet is a collaboration with Asus, producing a display of 1280×800 HD and powered by processor Tegra 3 of 16 cores.

The Google Plus app was created just for this tablet which also serves as a great device for reading contents. It comes with a powerful content recommendation engine (under Google Play) which supports music recognition.

Then, the keynote introduced Nexus Q which is a device to serve as a hub for queuing and aggregating contents from all connected Android devices within the vicinity. The application is sharing of contents while hanging out with friends or while having meetings and etc.

Back to Sergey Brin who interrupted the event by introducing Google Glass. It is the unthinkable technology which combines visual, audio, geo-location technology into a glass-based device wearable on a human’s head. Sound familiar ? Yes, it is the device that we have been dreaming about for decades. A device which allows us to capture just anything live as if a camera is implanted into our heads.

The idea of Google Glass started off 2.5 years ago by a team of innovators working as pioneers in the area of wearable computing. It has the vision of capturing beautiful moments without disrupting it and without delay. For instance, it allows ones to take photos without the object realising it since the photographer need not take aim. It is particularly useful for capturing sports moments such as parachute diving and etc. 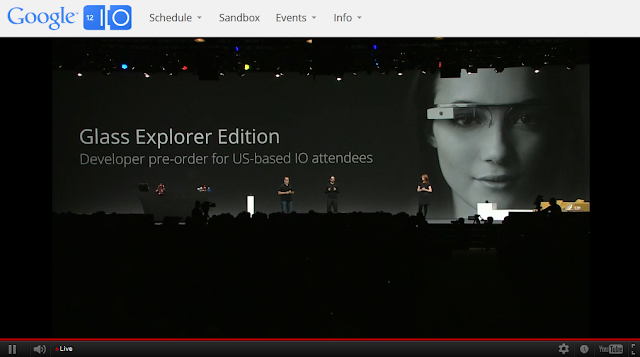 This is going to be one of the great innovations in human history, according to Google.

Google Glass will be available in Explorer edition (for early adopters) by early 2013 for USD 1,500 (for US only).