ATD recently organised a BITAS-KDC seminar themed “Strategic Enterprise Architecture and Transformation 2013.”
With co-organisers like MDeC and IASA (IT architecture professional association), the event saw attendance and thought leadership from the likes of top brass at Felda, MATRADE, Western Digital, Telekom Malaysia, Mesiniaga and even Japanese consultancy provider, IT Innovation. 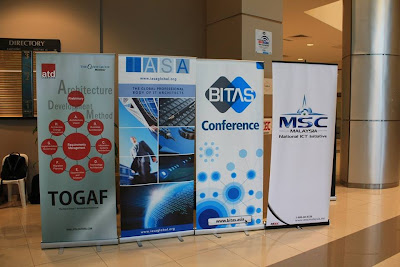 The half-day seminar began with an invitation-only executive breakfast, where MDeC’s COO, Ng Wan Peng moderated a roundtable comprising the President of IASA Malaysia Chapter, Hasan Ganny and CIO of Felda Global Ventures Holding Berhad (FGV), Daniel VC Lee.
Titled “Amplifying technology investment impact for the business”, the discussion which also involved nearly 70 breakfast attendees boiled down to the following questions that the MDeC COO posed to her panelists as well as to the floor:

1. How do you justify IT purchases?2. How do you link and show evidence that investment in tech does indeed give you the required outcome?3. How do you position IT investment in an organisation? Or what should the CIO’s role be in order to give best value to the organisation?
Ng explained the rationale behind why tech investments pose so many headaches: “Asking for money to do marketing is easier because it leads to sales. But to invest in IT, it is tougher.”
Return of investment for technology is not so easily discernible, or measurable.
Most times, the general view is: how does increasing the CPU power or bandwidth or memory of an IT system, benefit anyone other than the IT geek who can appreciate it?
Which is why for FGV’s Lee, he has had to back up every piece of technology he purchases with how it would help the user and eventually the business.
He shared, “I would get my IT staff to talk to the business user (ie. HR) to understand their KPIs, then map the system back to their KPIs along with how (the investment) can help improve it.”
Change the approach with change of jargonMATRADE’S Director of IT, Raja Nor Zihan Binti Raja Mohsin also shared about how the KPI of business uptime is already a given in their case. She emphasised,“No way our systems are not working 24/7!
“KPIs for IT (for MATRADE) is not from the IT systems’ aspect anymore, but from aspect of the sales it can assist and generate for Malaysia.  We should align KPIs in organisation, to be in dollars and cents.”
This was echoed by Lee who said, “One key thing to help justify purchases is to speak a common language with the business – make it a business project instead of saying it is a tech refresh or an application revamp.
“Get business users to own 50% of the project and express the KPI as good customer experience, for example. This changes the whole mindset of business users when they approach it.”Linking investments to outcomes
IASA President Hasan Ganny opined that there needs to be a formula to be able to show evidence of outcome from investments.
He said, “Information architecture (IA) shows use of the data effectively.
“With IA you could look into the pertinent areas and zoom in. You need to analyse the information so that you can anticipate the cause and effect (which will give clues as to the impact of an IT investment or how it links to an outcome), and measure the success of the business outcome.”
The tech investment decisionAn unexpected question came from the floor about the different reactions to when IT investments are driven by the management or by the IT department.
FGV’s Lee said, “Whether the requests come from bottom up or from top down, IT treats all proposals the same. Evaluation still has to be done fairly to suss out whether there is need to acquire or embark upon something.”
He also opined that in a more matured organisation, IT tries to push budget CAPEX and OPEX back to the business unit. “This is because they know what they want. And IT assists them.”
And therein lies the challenge because business people expect IT to know the former’s lingo.
The CIO todayHasan said, “Gone are the days when CIOs are MIS officers. Now, they have to be Chief Investment Officers too – they need to know the investment that is need to change business capabilities.
“They have to be Chief Innovation Officers as well, because they have to think of new lines of businesses and new sources of revenues.”
Avoiding white elephantsAs the seminar progressed on with an opening keynote and two more panel discussions, a moment of levity came up when a cheeky gent from AMD decided to ask, “A majority of IT departments are generally known to have a number of costly and burdensome systems that eventually become white elephants.

“In this kind of scenario, who should be fired?”
The general consensus around the room was that the CIO should be fired and Tetsuo Kajikawa from IT Innovation decided to succinctly replace ‘Chief Information Officer’ in CIO to become ‘Career Is Over.’